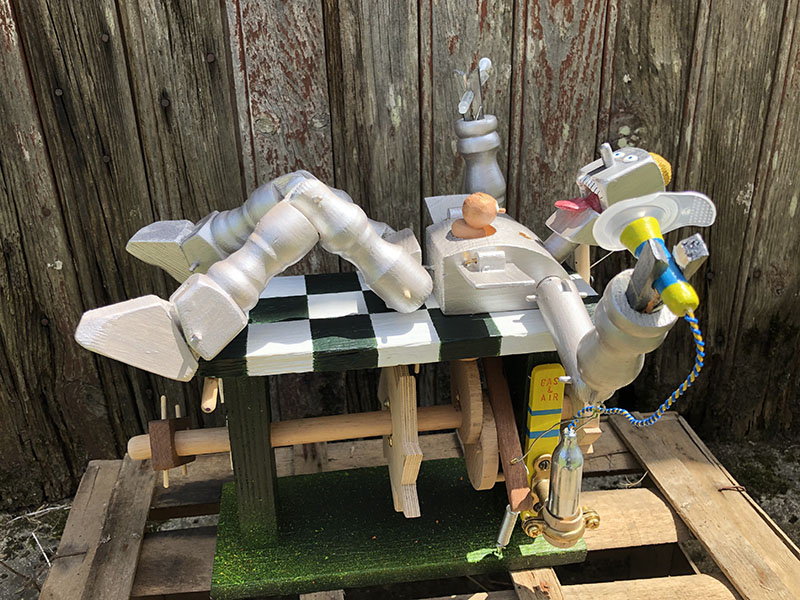 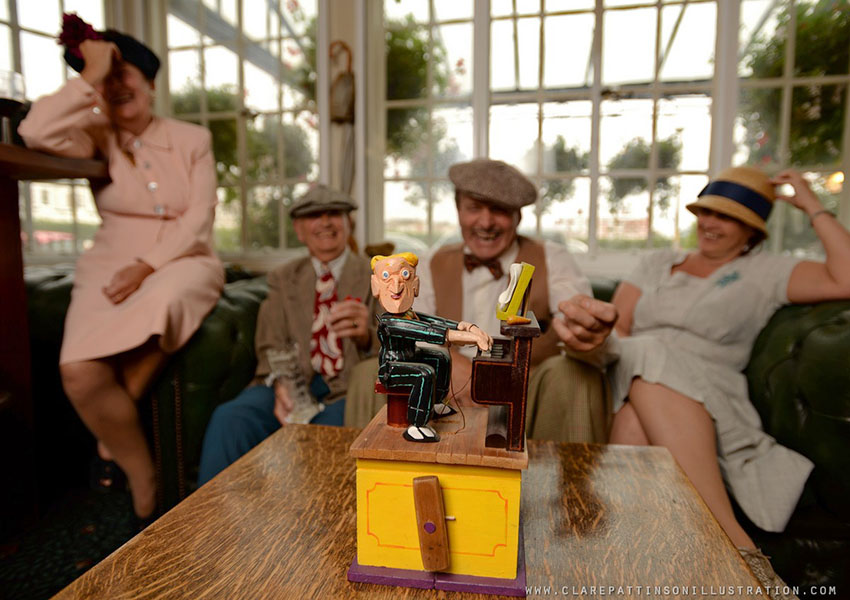 Turner Handel Traditional Toys aka Clare Pattinson began making automata and mechanical art in 2012. Prior to this, Clare worked with homeless and vulnerable people for twenty-five years in around the south east of England. She is now based between the thriving, regenerated seaside town of Margate in Kent and Mid Wales and France.

It is the eclectic combination of skills: humour, illustration, caricature and mechanics that inspire her. With a background in ceramics, cartooning,illustration and animation, it was whilst training to become a plumber in 2009, when she began to think in a more mechanical way. She enjoys pulling discarded items apart and examining them, and transforming them into something new.

Many of the materials used to design and build the work are found objects such as spokes from bicycle wheels dumped in the sea or discarded furniture thrown out on the streets. Recycling is important to her work and presents an interesting challenge. The found objects can greatly influence the direction the work takes, resulting in an element of surprise. Never one for following scripts or recipes, the design process starts from an idea and then gradually evolves and grows. Improvisation is important to the work.

Established, tried and tested methods rest in place as a secure back up. She enjoys working closely with her clients to make an idea come alive. Her choice of wood for carving is lime wood. In a world saturated with increasingly complex technology, these quirky mechanical toys show off their workings – springs, levers gears and cams. They creak into life and are delightful to engage with. Laughter, humour, colour and movement are the elixir of art and life.

Clare enjoys observing people and finding a moment or a situation to represent – as if extracting a still or frame from a movie, and playing that moment over and over again.

Automata can be regarded as the forerunner to computers, whereby the cams, leavers, pulleys and gears follow a continual pattern that has been programmed onto the shaft due to the positioning of each piece, and its relationship to the sculpted characters ‘acting’ in
conjunction with the workings.

Clare is an Alumni QEST Scholar (Queen Elizabeth Scholarship Trust) and member of the Heritage Crafts Association. She is a member of the British Toymakers Guild, the Cartoonist Club of Great Britain and the Professional Cartoonist Organisation.

Her work has been demonstrated at Art in Action, the Royal Windsor Horse Show and in several major group and solo automata exhibitions around the U.K, as well as in the V&A Museum. Clare’s work has been commissioned by private clients from America, Australia, the U.K and Ireland. Recent support from The Fenton Art’s Trust enabled Turner Handel to take workshops out into the community and reach people and interested groups further afield.

Television appearances demonstrating her work can be seen on Cbeebies, Junk Rescue (Worn Brooms) and Sunday Brunch on Channel 4. 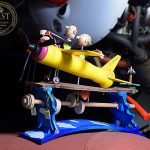 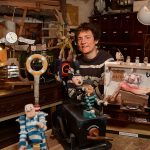 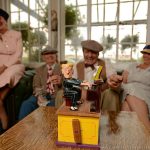